UMass College of Information and Computer Sciences (CICS) professors Yuriy Brun and Alexandra Meliou have received a $100,000 gift from Oracle Labs to support their work on software fairness, focusing on testing software for bias using an automated test generation technique. 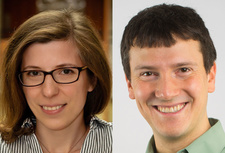 Their research focuses on software bias, which can be caused by systems learning from biased data, by errors in implementation, or by unintended interactions between components. For example, translating “He is a nurse. She is a doctor.” into Turkish using Google Translate or Bing Translator, and then translating the result back to English produces “She is a nurse. He is a doctor.” Brun and Meliou argue that when software exhibits bias such as this, even if that bias is learned from its environment, this behavior can violate software requirements and is therefore a software defect. They further argue that technology can help detect and avoid such defects.

“At a time when software algorithms decide what advertisements we see, what articles we read, and whom we interact with socially, as well as who is eligible for parole, or who is approved for a mortgage, it is crucial that software developers consider and mitigate potential software bias,” says Meliou.

Unlike prior work, which focuses on measuring correlations, Brun and Meliou’s tools measure causal relationships between sensitive input attributes and software behavior. Causal relationships are a more powerful measurement mechanism that can be used to explain why a system is biased, and to remove or mitigate the bias.

Brun and Meliou’s work aims to detect causal bias in a wide range of systems. While their existing tools can handle systems with categorical inputs, many data-driven systems involve complex inputs, such as natural language or photographs, and produce rankings or continuous values. Extending bias detection to these types of widely used systems can have broad societal impact.

Brun and Meliou are part of the EQUATE initiative from CICS. EQUATE (Equity, Accountability, Trust, and Explainability) is made up of CICS faculty who are engaged in research and education related to equitable algorithms and systems. For more information, visit the EQUATE website (equate.cs.umass.edu).

Yuriy Brun’s research interests include software engineering, software fairness and bias, self-adaptive systems, and distributed systems. He received his doctorate from the University of Southern California in 2008 and was a Computing Innovation postdoctoral fellow at the University of Washington until 2012. Professor Brun is a recipient of the NSF CAREER Award, the IEEE TCSC Young Achiever in Scalable Computing Award, a Best Paper Award, two ACM SIGSOFT Distinguished Paper Awards, a Microsoft Research Software Engineering Innovation Foundation Award, a Google Faculty Research Award, a Lilly Fellowship for Teaching Excellence, a College Outstanding Teacher Award, and a Distinguished Reviewer Award.

Alexandra Meliou’s research interests focus on data provenance, causality, explanations, data quality, and algorithmic fairness.  She received a doctorate in Computer Science from the University of California, Berkeley in 2009. Prior to joining the University of Massachusetts Amherst in 2012, she spent three years as a postdoctoral research associate at the University of Washington.  She has received recognitions for research, teaching, and service, including a CACM Research Highlight, an ACM SIGMOD Research Highlight Award, an ACM SIGSOFT Distinguished Paper Award, an NSF CAREER Award, a Google Faculty Research Award, multiple Distinguished Reviewer Awards, and a Lilly Fellowship for Teaching Excellence.