After three semesters studying computer science at the University of Massachusetts Amherst’s College of Information and Computer Sciences (CICS), recently graduated master’s student Ankur Aggarwal has secured a bright future with a job at Google’s headquarters in Sunnyvale, California. 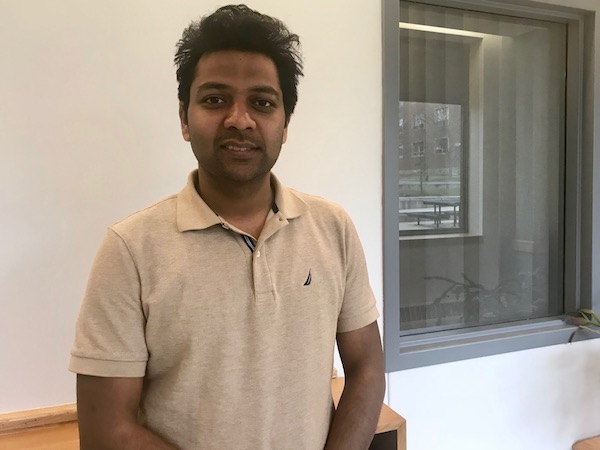 ​Aggarwal will work with Google’s GSuite Enterprise Team as a software engineer building an Enterprise application that retains, holds, searches, and exports data to support organization’s archiving and eDiscovery needs. At UMass, he worked with Andrew McCallum, director of the Center for Data Science (CDS) and the Information Extraction and Synthesis Laboratory (IESL). IESL focuses its research on machine learning and natural language processing (NLP).

Recently, the lab announced a collaboration with the Chan Zuckerberg Initiative, founded by Mark Zuckerberg and Priscilla Chan. McCallum and his lab are leading the Computable Knowledge Project, a project to create an intelligent and navigable map ofscientific knowledge from journal articles using NLP. As a result of two semesters working with McCallum, Aggarwal earned a summer internship with the Chan Zuckerberg Initiative where he analyzed biomedical text abstracts to identify various entities in the text and then linked those entities to a known database.

Aggarwal believes it was this internship that “shortlisted” him for the position at Google, thanks to the industry connections McCallum facilitated.

Even though he lacked significant experience in NLP, McCallum welcomed Aggarwal aboard and mentored him. Aggarwal said he felt like McCallum cared less about his prior experience related directly to NLP, and more about his passion. “What he’s really interested in are people who are excited about working in a particular domain,” Aggarwal said.

He explained that McCallum shaped Aggarwal’s experience with NLP by giving him hands-on projects, little by little, until he was well-versed and ready to take on bigger initiatives like Chan Zuckerberg, and now Google. “[McCallum] tries to figure out where your interest lies, and he gives you more work accordingly as you start to get the hang of things,” Aggarwal said.

In addition to the internship and work in the lab, the classroom experience at UMass helped prepare Aggarwal for Google, he said. He added that two classes, both taught by Professor Justin Domke, helped shaped the trajectory of his success: probabilistic graphical modeling and machine learning.

He continued that because CDS is well-known for data science and machine learning, it makes CDS resumes stand out at companies such as Google, Facebook and Amazon. “It will make you distinct alongside other colleges because of the type of collaborations we’ve been doing, but also the placements we are getting at well-known companies,” Aggarwal said.

As for starting off on his bright career in Sunnyvale, Aggarwal said he’s most excited about the workplace culture at Google. “I want to continue to be in a learning mode. I’m going there not as a person who’s learned a lot, but as a student again,” he said. “I’ve learned the theory, and now I want to learn how these things apply in practice and how they work.”