Honeybees are dying at an alarming rate. Six University of Massachusetts Amherst engineering students are using their senior design project to develop a system that makes beekeeping easier for commercial and hobbyist beekeepers.

Virginia Ng, Benjamin Palazzi, Manali Palwankar, Max Aukshunas, Amy Morin and Phuoc Truong are designing a honeybee hive with embedded sensors to record data that beekeepers can use to gain insight into the health and productivity of a colony, and even to obtain early warning of potential diseases and disorders.

The team envisions a future in which high-tech hives are in widespread use and regularly transmitting colony health data to a central data warehouse for analysis and reporting. Armed with this data, beekeepers and researchers will be able to promote healthy bee populations locally, regionally, and nationally.

On Saturday, Oct. 21, the team took a trip to Warm Colors Apiary in South Deerfield to meet with Dan Conlon, Warm Colors co-owner and president of the Russian Honeybee Breeders Association, to learn more about bees and beekeeping. Conlon showed the students around the apiary, and shared ideas from a beekeeper’s perspective for the group to consider in developing the sensors. 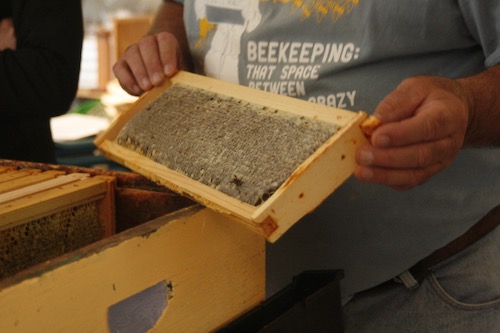 “I’m most interested in the ability to use data as a diagnostic tool,” Conlon said to the students during a brainstorming session. “If you want a useful invention, you want people to use it, and it’s important to understand the needs of the industry.”

The idea was originally conceived by Frank Linton, a retired artificial intelligence engineer with a doctoral degree in education from UMass Amherst and a Master Beekeeper certification. Linton spent the last several years giving lectures on the idea at beekeeper conferences and operates a website that serves as a clearinghouse of information about colony monitoring tools and methods.

Brant Cheikes, executive director of the Center for Data Science, heard the idea and saw the opportunity to use data science to significantly benefit the beekeeping industry. Without a workable design for a data-collecting hive, however, a data-science solution seemed out of reach. Bernd Schliemann, who runs the College of Engineering senior design program, suggested that Linton and Cheikes write up the idea as a potential senior design project for the 2017-2018 academic year.

The beehive project was one of many pitched to incoming seniors in the mechanical and industrial engineering program. Ng was sold on the idea, and after a short time developed a team. Besides seeking a project with real-world applications, Ng’s group is also passionate about the environment and the important role of bees.

“I wanted to get involved in something I’ve never done before,” Palazzi said. “This [project] was open, and I thought it’d be cool to have an opportunity to work with sensors and data retrieval while having an impact on the environment.”

The students will start the year-long project with a sensor that measures temperature and humidity, without posing a threat that could cause the bees to expel it from the hive. They hope to utilize solar power and wireless connections to send data, and may incorporate motion or infrared sensors to detect predators. From temperature and humidity data, beekeepers can infer the amount of brood the bees are rearing, a key indicator of honeybee colony health. 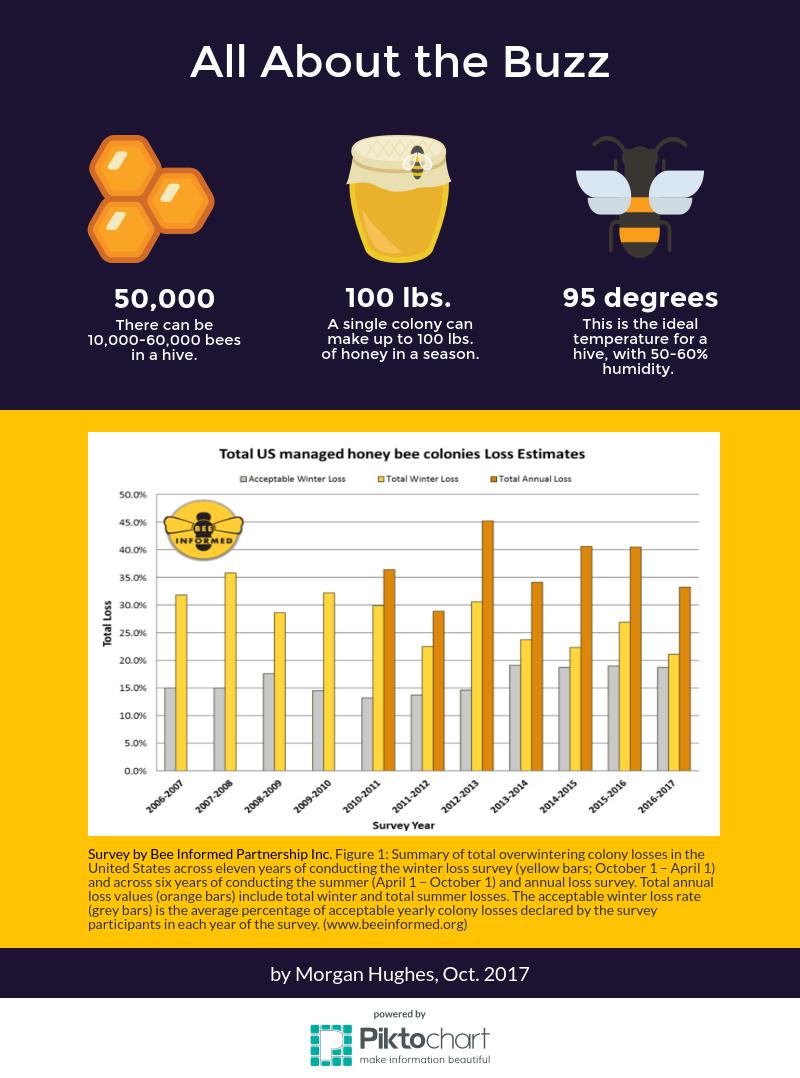 “The goal is to get accurate data collection, starting with temperature and humidity. Eventually, if there’s an opportunity to broaden the scope, that would be great,” Palazzi said. “This could be useful to beekeepers because it gives them an idea of how their colonies are behaving.”

Conlon himself is quite familiar with data collection and record-keeping -- he files four in-depth reports for the USDA each season and meticulously counts bees and mites in each hive regularly -- but sees value in new ways to collect data with greatly reduced human effort.

He pointed to temperature and humidity as two of the most important characteristics to monitor. Besides indicating the amount of brood present, these sensors can provide insight into how the colony is progressing over winter.

Before parting ways, Conlon sent the students home with a brand-new Langstroth hive to use as a starting point for their design work. He encouraged the team to consider the survival instincts of the real beneficiaries of their project. “As you’re designing technology, remember you’re dealing with a biological component,” Conlon said.

As the group departed, Conlon reminded them to be prepared for setbacks and not get discouraged: “Nature is tough sometimes.”