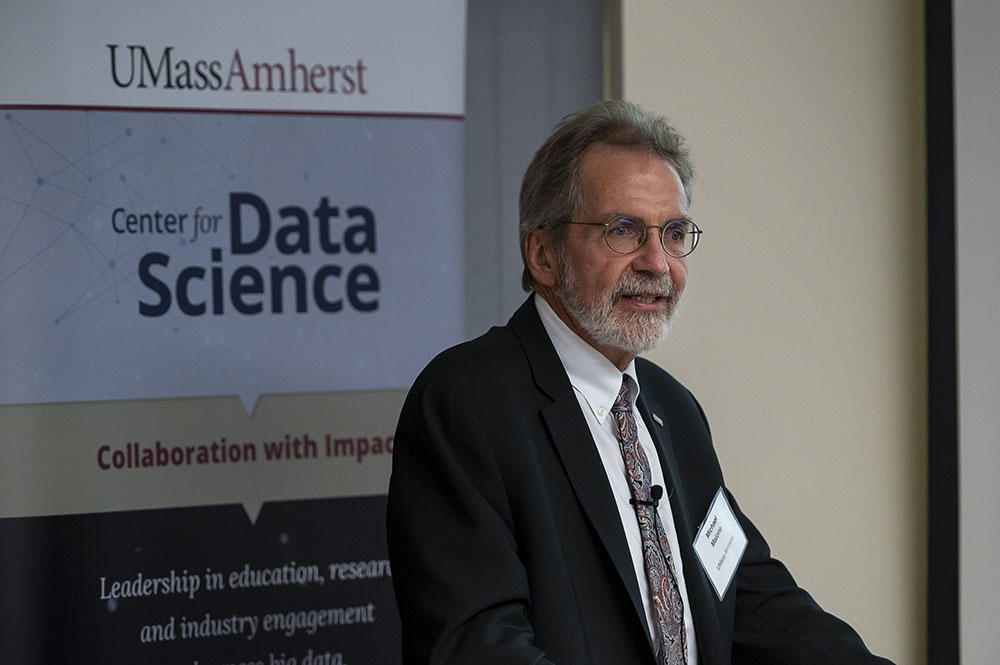 On October 21, UMass Amherst Vice Chancellor of Research and Engagement Michael Malone addressed a room of 65 people who had gathered to hear about Data Science for the Common Good (DS4CG), a summer program administered by the Center for Data Science. He shared the second goal in the university’s  strategic plan: Establish UMass Amherst as a partner of choice in advancing and applying knowledge and innovation for the betterment of society. “There is no more fitting example of this than Data Science for the Common Good,” Malone said. 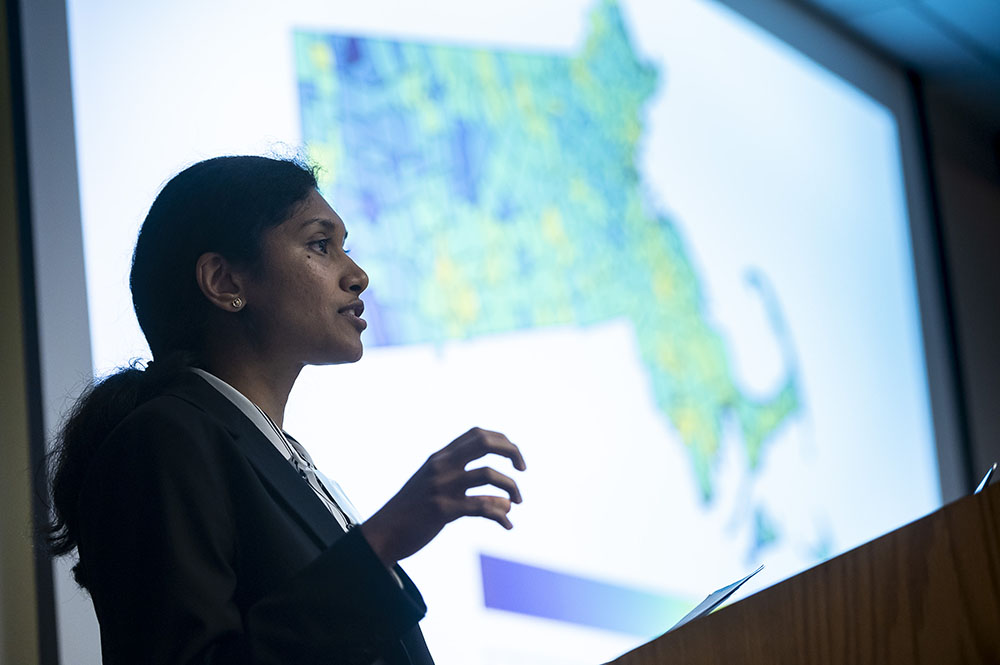 Pracheta Amaranath presented on behalf of the Massachusetts Department of Public Health (MADPH) student team. She described the process the team implemented, working closely with MADPH epidemiologists, to assess the well-being of cities and towns across Massachusetts by deriving social determinants of health from disparate data sources. Dr. Sanouri Ursprung, director of the MADPH Office of Statistics and Evaluation, praised the technical caliber of the fellows and their ability to absorb and process specialized epidemiology data and information, while approaching the issue with a data science and computing lens. The results will help MADPH guide the deployment of state health resources to where they are most needed. 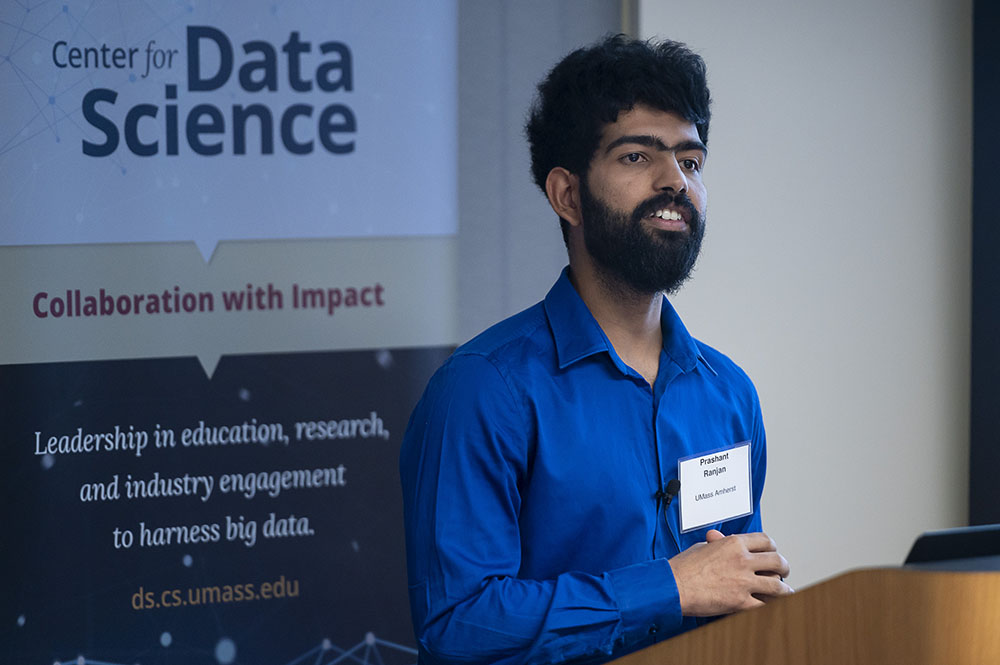 The Charles River Watershed Association (CRWA) talk was given by Prashant Ranjan. Ranjan talked about how the team analyzed monthly water samples taken from the Charles River to determine that water quality has significantly improved over the last decade. The team also helped CRWA fine-tune the timing of when they collect water samples after precipitation events in order to more accurately measure the impact of runoff on water quality. Findings like this will inform policies that promote responsible watershed management and a healthy river ecosystem. 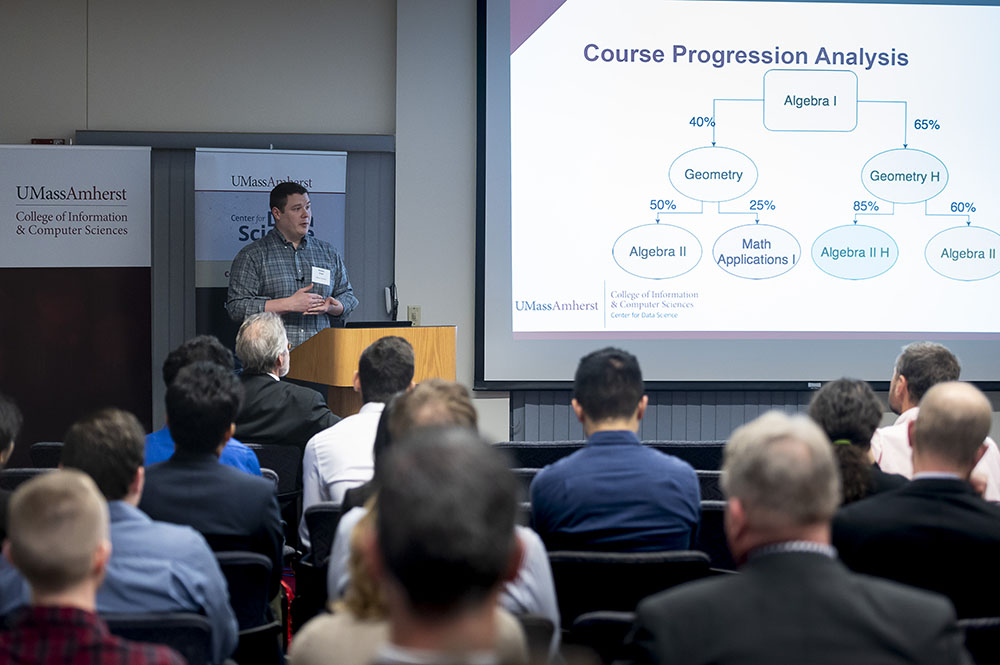 William Goss gave the lightning talk for the Springfield Public Schools (SPS) student team. Goss described the work the team performed to marry anonymized SPS student data with college enrollment data from a national clearinghouse, to determine attributes that contribute to post-secondary success, such as courses taken and course sequences. The findings will help SPS fulfill its mission of graduating students who are college and career ready. 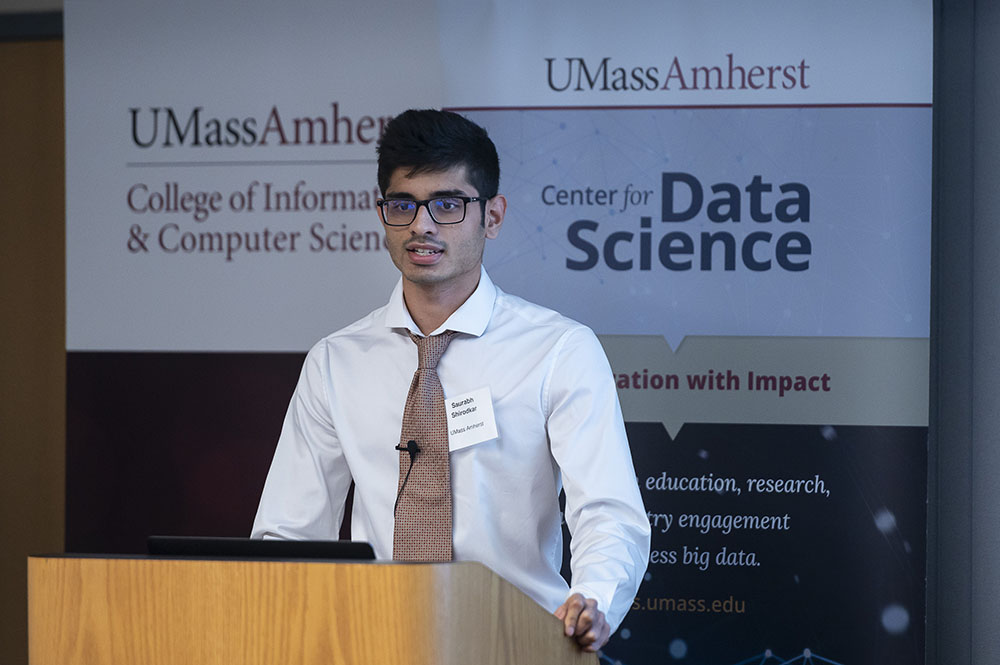 The Metropolitan Area Planning Council (MAPC) student team was represented by Saurabh Shirodkar. Shirodkar shared how the team worked on enhancing a forecasting technique used to project scenarios about future populations, significantly shrinking the resources needed to implement it, and increasing the breadth of its applicability. The results will help MAPC to better serve the 101 cities and towns that rely on their expertise for municipal planning. 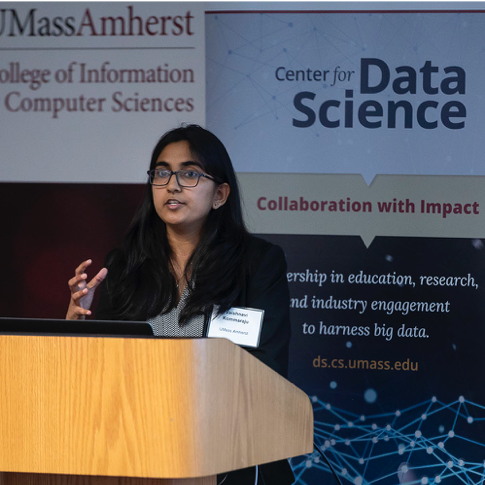 Finally, Vaishnavi Kommaraju presented on behalf of The Nature Conservancy (TNC) student team. This team devised a computer-vision algorithm to automatically detect the presence of animals in photographs. As part of TNC’s work to reduce animal-vehicle collisions, TNC is building models of animal migration patterns by analyzing photographs triggered by motion and heat sensing from cameras placed in the wild. The students’ work will reduce the resources needed to comb through thousands of images to identify those with an animal, and will help TNC more efficiently build their models. Laura Marx, TNC forest ecologist, described how vital it is to TNC’s work that they are able to provide evidence of animal migration patterns across land areas adjacent to roadways. 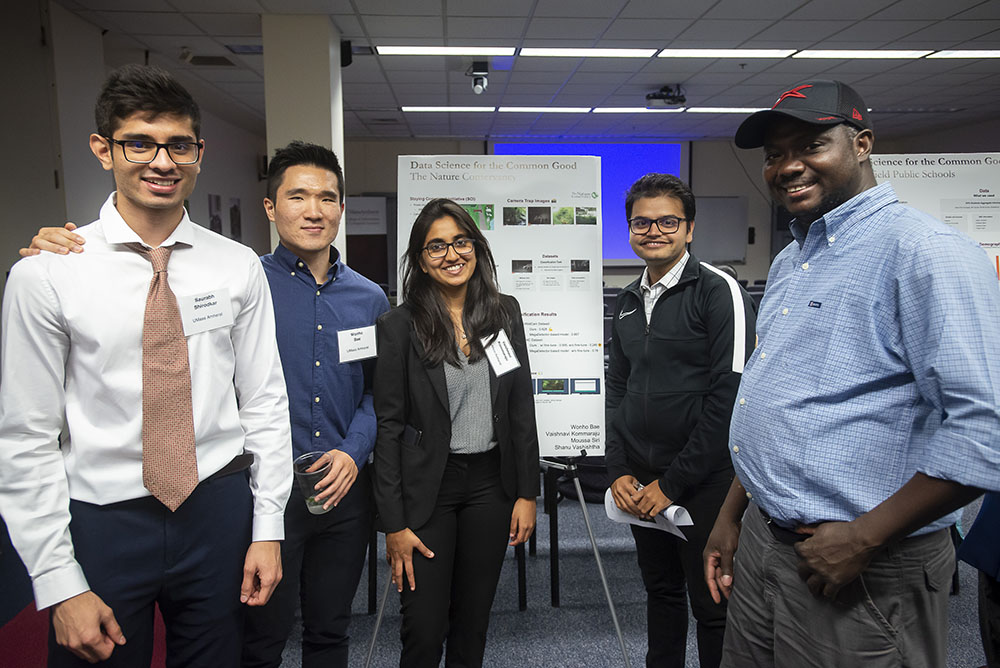 Brant Cheikes, executive director of the Center for Data Science (CDS), said, “At a time when society is increasingly aware of the potential for data science to be used in ways that cause harm, our aspiring data scientists are hungry for opportunities to use their new powers to do good. We launched Data Science for the Common Good to help feed that hunger. In keeping with the CICS vision of Computing for the Common Good, we are committed to education, research, and public service that contribute to the betterment of society.”